We have the latest from Matt & Ade Walk on their most recent event. As always, we’re proud to sponsor the team and their efforts.

We travelled to Builth Wells for the second time this year for the Nicky Grist Stages. After our recent bad luck on the previous outings, we really needed a good result on this event to keep our Championship hopes alive. The incoming heatwave meant it was going to be loose and dusty, with internal car temperature near 40 degrees.

We left the ceremonial start in Builth Town Centre early on Saturday morning. The first Stage of the day was Llyn Login, a 3.5 mile test with kinks over crests to catch out the unwary. We were trying different tyres , so took things easy on the first stage to become familiar and to  gauge what the grip was like. We found one corner near the live feed camera slippery. While the slide made for some good footage, it cost us some time!

After setting third fastest time in class we moved on to Stage 2, which was the 4 mile Monument test. Running just 10 cars from the front of the field we were still sweeping the loose gravel off the surface. After a drama free run we headed to Stage 3, Halfway, still in third place.

Halfway was a 5 mile stage, still with a layer of loose gravel covering the surface. By now we had some more confidence in the tyres and decided to have a push. We were untidy, missing our braking points for a couple of corners and running wide. Despite this we were just 3 seconds off winning the stage and were now 13 seconds off the class lead. 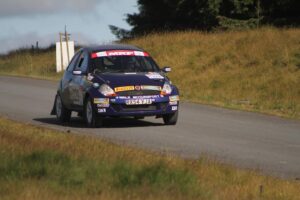 The fourth and final stage before service was the 10 mile Crychan Stage. We decided on the road section we were going to have another push but try to be neater and avoid wheelspin coming out of the tighter corners. This was our best stage of the day so far, by now we had some real confidence in the tyres. Our only moment was on a downhill tightening right hander; going in just a little too quick and bouncing off the bank on the outside. We had taken 5 seconds back off the leader and moved up to second in class. Then we decided to swap the front tyres for a harder compound and dropped the rear tyre pressures.

The afternoon loop was a repeat of the first so it was back to Llyn Login.  We started the stage behind one of the novices in a Suzuki Swift. We knew if we hadn’t caught them by the end of this stage we would have to start the longer stages behind them and would likely be caught in their dust.

With our sights set on the car in front we headed into the stage. We were more committed over the crests, but the rewards were not without risk. One crest launched the back of the car into the air, which sent us towards a ditch but we gathered it up and pushed on. By the end of the stage we had caught the Swift, allowing us to start the next stage in front. We had gone 11 seconds quicker than our previous run through to maintain our second place.

In Stage 6 we narrowly missed out on the stage win by just 0.7 seconds! We were still second in class heading into Stage 7. This stage was where the battle swung in our favour. The class leader had a spin and dropped 30 seconds. We were now in the lead by 18 seconds with just one stage to go. It wasn’t going to be an easy cruise to the finish, the temperature gauge had been over 100 degrees in the previous stage, with the next one being twice as long. 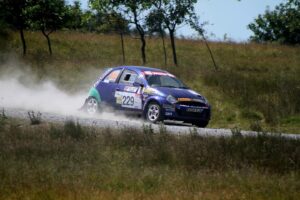 By now the temperatures were at their highest, itwas almost unbearable . To make matters worse, to keep the engine cool we would have to complete the last 10 miles with the heaters on full. Even with this, the temperature gauge was touching 120 degrees and the car was down on power. We backed off a little to let the engine cool down midway through and pushed when the temperature came down. By the end of the Stage we had extended our lead to 22 seconds.

After an uncomfortable drive back to Builth in a baking hot car we checked into the final control as the 1400C class winners, as well as W3 class winners. We had also bagged third 1400 overall on the day, meaning we would get to spray the champagne on the riverbank alongside the British Rally Championship winners.

As always, this result wouldn’t be possible without the continued support of everyone at Coordsport